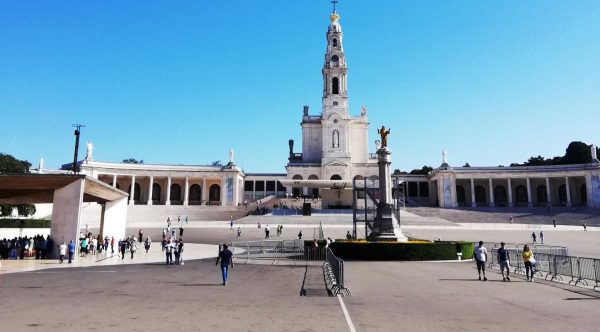 The city of Alcobaça is surrounded by hills. Alcobaça’s settlement dates back to Roman times, and its development took place in the perimeter around the Alcobaça Monastery, around the 13th century. With the donation of lands by king Afonso Henriques to the Cistercian Order, the religious order played a fundamental role in Alcobaça’s growth, being present there for seven hundred years. Nowadays, the urban center is a harmonious set of streets and houses next to the Monastery.

The Monastery of Alcobaça started its construction in the 12th century. We can observe stained glass windows of unparalleled beauty in what was the first test of Gothic architecture in Portugal. In this monastery are buried D. Pedro and D. Inês de Castro who lived a love story with a tragic end.

Fátima, where you learn about the apparitions of the Virgin Mary that apparently occurred to a group of children in 1917. Discover the devotion to peace and spirituality at the Fátima Sanctuary. Fátima is one of the most important shrines to the Virgin Mary in the world, as three shepherd children are said to have stated that Mary appeared to them. Fátima one of Europe’s most important pilgrimage site, with a history and culture that will fascinate the religious and nonreligious alike.

Nazaré Cliffs with extraordinary views of the Atlantic Ocean. Learn about the history of this coastal fishing town, a popular summer retreat away from the capital city and about another appearance of Virgin Mary—this one in 1182—and ponder this unique recurrence of divine intervention.
Today Nazaré is also known for the biggest waves in the world. All thanks to the phenomenon of the Nazaré Canyon, phenomenal waves that made Nazaré famous all over the world, in 2013 the American surfer McNamara broke the world record when surfing a wave of about 30 meters in height, during the period of the year we can see them with our eyes.

Óbidos one of the most beautiful villages of Portugal, within the walls of a medieval castle. Obidos belonged to the defensive pentagon of the Five Castles, this by the hands of the Templars, later used as a wedding gift of D. Dinis to his wife D. Isabel, the village became part of the House of the Queens. Here we will also go to the discovery of one of the best known and appreciated liquors, Óbidos Ginja.
In 2015, UNESCO considered Óbidos as a literary city as part of the Creative Cities Network program.